Request a Call Back

Please fillup below details and will call you back!

At the time of implementation of the GST in July 2017, the GST laws & rules notified,

The due date for filing the returns were staggered over the period 20 days from the end of the month. The GSTN glitches ensured that these returns never see the light of the day except for GSTR-1. The basic reason for failure of these returns was fact that the “reconciliation of invoices” was to be carried out on the portal. This idea failed miserably as the GSTN portal slowed down due to the volume of the information uploaded by the supplier and the recipients. The CGST and SGST laws still provides for matching of the credits even though the GSTR-2 & GSTR-3 are postponed in Section 39, Section 41 & 42. These sections are not amended even after postponement of GSTR-2 & 3.

After this flop show, the GST council decided to defer the filing GSTR-2 and GSTR-3 and at the same time introduced a new one pager return GSTR-3B in addition to GSTR-1 which was getting successfully uploaded on portal. Since last more than 2 years, the taxpayers got used to these two returns.

But the dream of “matching the credits” was still unfulfilled as GSTR-3B was allowing the credits without check w.r.t actual payment of the tax by the supplier in the Government treasury. Thereafter, the GST council formed task force to review the existing returns and to suggest new returns. Also, Infosys, who is managing GSTN, led by Mr. Nandan Nilekani made presentation to the GST council wherein the possible solutions were presented to the GST council.

After the lot of deliberations, the GST council announced simplified GST return (Sahaj & Sugam) filing mechanism which would be introduced for taxpayers with a turnover below Rs. 5 crores and also new return for the large taxpayers. Sahaj & Sugam would require lesser information to be declared as compared to a return to be filed by the regular taxpayer. The draft of the new returns is published for public at large and also available on the portal to trial.

The broad highlights of the new return format are,

The GST council had released below transition plan for the proposed GST new return system. It was planned to be implemented phase-wise from October 2019 onwards. The implementation plan given was, 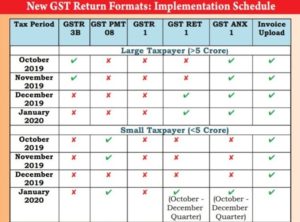 In 37th GST Council meeting, the council decided to defer the implementation of new returns. Now it has been postponed till 01.04.2020. The implementation plan will be more or less in similar manner as mentioned above. Also, there are possibilities of amendments due to technical difficulties of GSTN and / or taxpayers will face based on the testing done by the taxpayers and feedback received by them.

In the new returns, the responsibility of matching is shifted from GSTN portal to the taxpayer. The proposed return system is also increasing the threshold of small taxpayers from current 1.5 Cr to 5 Cr.

The new return format is expected to face below initial issues,

Apart from above mentioned initial issues, the new return format will have some perennial issues like,

The new return formats, in particular Annexure-II, is designed to fulfil the dream of “matching the invoices” for allowing the credits. But looking the past records / history of the GSTN portal, it would be interesting to see how the portal will respond to proposed changes. But overall, it can be said that this is nothing but “Old Wine in New Bottle”.