Request a Call Back

Please fillup below details and will call you back!

Import Process by EOU/ STPI / EHTPs (August 2017) GST implementation has brought multi fold changes in the Indirect Tax regime. GST has also impacted the considerable changes in the custom duties as well as procedures therein. Though the Government has released the GST law / rules / procedure in advance but the Government did not released the associated changes in the custom law / rules made thereunder or Foreign Trade policy. On late night on 30.06.2017, guidelines for changes in Customs Act and FTP under GST regime where brought in the public domain by way of various Notification, circulars and trade notice. It would be unfair on EOUs to note, understand and implement the changes as suggested in documents released by the Government. If these changes would have intimated earlier, the Unit could have developed their internal system for these compliances at the same time when they developed systems for embracing of GST. Nevertheless, now it is important to understand the changes proposed for import of the goods by EOUs and listing down the actions to be taken immediately so as to avoid any stoppage of business processes. Current Process (in brief):

Proposed Process: Under the GST regime, the process of import of the goods has been simplified. The principle notification 52/2003-Cus dated 31st March 2003 has been amended vide notification 59/2017-Cus dated 30th June 2017. As the revised notification, for claiming import duty exemption, the EOUs are required to follow the procedure mentioned in Customs (Import of Goods at Concessional Rate of duties) Rules, 2017 (hereinafter referred IGCRD, 2017). As the IGCRD Rules, the EOUs are expected to take below actions, 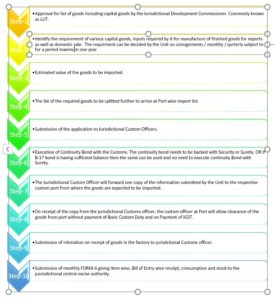 In addition to above, procedure the EOU will be required to maintain Bill of Entry wise below records, Further, the unit is expected to produce above information as and when required by the Deputy Commissioner of Customs or, as the case may be, Assistant Commissioner of Customs having jurisdiction over the premises where the imported goods shall be put to use for manufacture of goods or for rendering output service. Return for reporting of Imported goods. As per the Circular 35/2016-Cus dated 29th July 2016, the EOU is required to be submit details of quantity imported, consumed, re-exported and in stock in FORM A. The Form A is required to be submitted by 10th of the following month. It is important to note that circular 35/2016 has not been rescinded and therefore the procedure and compliances as prescribed in circular 35/2016 needs to be followed. To summarise, it is important to note following point, Though the exemption has been granted to EOUs and procedure has been simplified, the onus of correct maintenance of the records and its reporting is bestowed on the EOU. Therefore, one has to be careful enough when they are claiming any benefits which are with statement  “*condition applied”.]]>